We’ve now passed the precipice of Civil War II, we have all the post civil war storylines starting to reveal themselves and tiptoe around the fact that the last issue of Civil War or it’s tie-ins have yet to be released. This issue paints a very clear picture of what happened at the end of the Civil War II books without actually saying it aloud. I won’t be going into the thick of it, but when the event started you could see where it was going and your suspicions are most likely right. With that being said, I still want to read the last issue of Civil War II just for the closure, just to know where everything shakes out and what I can be expecting for the new Marvel NOW! 2016 fall stories. I really should stop talking about Civil War II so much, which is another reason why I want it to be over, so I can stop prefacing my reviews with it. For this issue, as always, I’ll be avoiding spoilers as deftly as possible because it isn’t fair to the creators or to the readers. I’ll also avoid them because I want a Doctor Doom focused book to sell so I can continue reading this new chapter in Doom’s tragic and redeeming life.

If you’re not familiar with Doctor Doom’s current situation after Secret Wars, he’s been doing alright, actually he’s been doing great. He’s working on atoning for his past sins and wants to do some good. It definitely helped that Reed Richards gave him his face back, an ultimate sign to Doom that even through all the torment he’s caused Mister Fantastic, his family, and the world, Reed could give Doom a chance to change. Since then he’s been trying to help Tony Stark with his problems, as little as Tony wants his help Doom still wants to. We get a great start to a story that will let us learn more about Doom’s life, where he is mentally and emotionally. This story reminds me of a What If… issue where Tony Stark and Doctor Doom meet in college and trade bodies, except this time Doom is becoming a hero and Tony isn’t around to witness it. 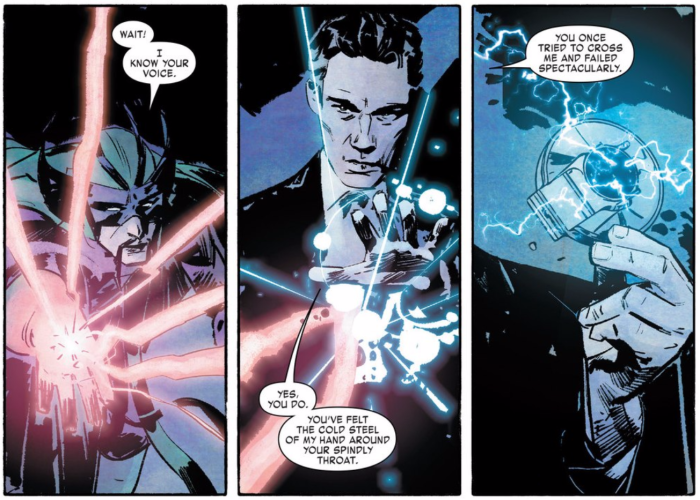 The story itself is a setup, a setup to Doom becoming one of the new Iron Men, or Iron People I should say. Doom still has that pompous arrogance to him, the way he talks to his foes is always fun and humorous. We do see his more sympathetic side come out, hearing him talk with some of his new friends sounds like a truly changed man. We can’t be sure now if this is merely a trick to position himself in a place of power over other heroes, or a ploy to take over the world, but for now he seems genuine in his wanting to do good. Of course with Brian Michael Bendis writing this story, it is heavily connected to the end of Civil War II and does have a certain coherence with the supposed outcome compared to the disjointed feel of some other books. With a good setup and some great jumping points that connect to Doom’s past, we’re sure to have an excellent book on our hands.

Speaking of excellent, the art by Alex Maleev is keeping in the style of International Iron Man, with rough line work complimented by Matt Hollingsworth vibrant coloring. The artwork itself is very evocative of Doom’s position, lot’s of bright hopefully neon colors all contrasted on dark shades of black and grey. My only gripe is some panels in the beginning are a little tough to follow, but after going through it again was able to figure out what I wasn’t seeing. After reading this book, I went to see what else Alex Maleev has worked on, and was surprised to see one of my favourite series Aliens vs Predator in his list of works. I’m a bit new to following certain artists but I will be looking to find some of his other works to enjoy.

To say the least, I’m excited to see where this is going. Will we see the return of the dreadful Doctor Doom, or the rise of a more heroic and Infamous Iron Man? Either of these make for some great storytelling potential that will either change Victor Von Doom into something new and exciting or we’ll get to see him fall from grace and reclaim the title of coolest villain ever (in my opinion). This first issue definitely feels short, but it will leave you wanting to read and know more, I highly recommend it.