Batman Beyond, created originally as a continuation of Batman: The Animated Series by Bruce Timm and Paul Dini in 1999, told the story of Terry McGinnis becoming the new Batman in Neo-Gotham. I grew up watching re-runs of this show on Canadian TV, never caring that I’d seen the episodes over and over, it was just that great. After it had stopped being shown, sadly I’d forgotten about it, not completely but still enough that I hadn’t attempted to follow-up with it. They published a short run of comics while the show was on the air, but not till 14 years after the show’s end did DC comics begin publishing a new ongoing series within the mainstream DCU. With many of the Rebirth titles as of late, there is a little story that is helpful to know, but they’re built to be able to go in fresh and not worry too much about the previous issues.

Writer Dan Jurgens, artist Ryan Sook, and colorist’s Jeremy Lawson & Tony Avina bring our latest iteration of Neo-Gotham to life with vivid detail, vibrant color, and straightforward to the point writing. The story begins right after Batman Beyond #16, where we saw Terry McGinnis break free of Spellbinder’s mind warping technology and relieve a time displaced Tim Drake of the role of Batman. In the first few pages we are shown the origin of Terry’s Batman, very faithful to the original show’s first episode. Reading these pages was like going back in time and watching it again; the look of an aging Bruce Wayne and even Terry’s signature brown jacket. The nostalgia is very strong with this book from the very first pages. But does it stand on its own?  As the story so far is concerned, we are seeing returns to Batman staples outside of the Beyond series, which some fans may be tired of, and some may be clamoring for. 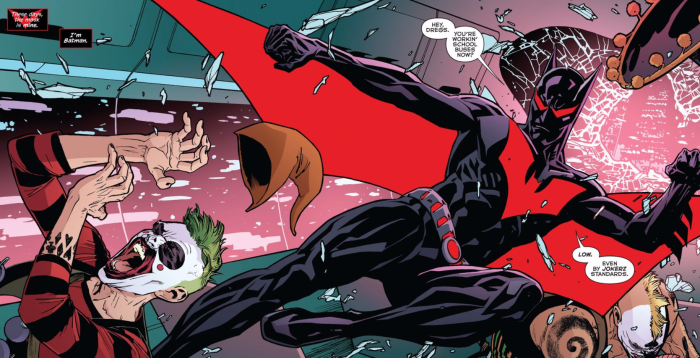 As I mentioned before, the color of the art in this book is nothing else but vibrantly wonderful. With Neo-Gotham bathed in glowing cyan and contrasted against the pale red and rouge foregrounds. It’s all gorgeous and evocative of the typical megalopolis’ of countless sci-fi settings. The detail of the art is also great, it gives a hefty amount of life and detail to each page without cluttering the panels too much. While the art and color are fantastic, some of the lettering while very emotive and great happens to clutter some panels and pages and distract rather than help. This is still a very minor gripe with the art as I still enjoyed the rest of it very much.

My only real gripe aside from lettering is the where this story might be heading, as someone who enjoys the majority of Batman’s villains, I’d love to see new incarnations of some of his greatest villains along with some new. Seeing what books like All-Star Batman and Tom King’s current run on Batman is doing with its villain’s, it would be great to see take it in a different direction. I apologize for being vague, but I desperately don’t want to spoil anything passed the first 5 pages of this book, because once you start reading past that point you’ll see where it’s headed. 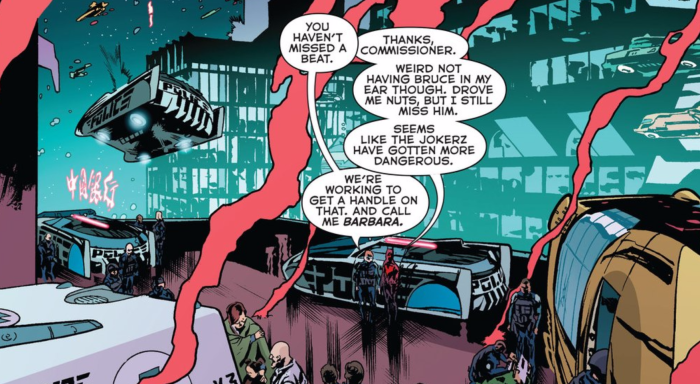 Altogether this issue is a great place to jump in, starting off fresh with some mystery and drama ready to unfold in the coming issues. It would definitely help if you’ve seen the animated series or read some of the previous comics with Tim Drake as Batman but not totally necessary. This issue introduces a great deal of information to new readers but still all very manageable. It’ll be interesting to see where this series takes us and whether we’ll get any good cross-overs with current timeline DCU rather than just sticking in the future.