The Vision is an interesting character, not one I know too much about since some of my first real exposure to him was the Marvel movies. After my last article I was recommended a few books and Vision was one of them so I decided to buy the first few issues to see if I should add them to my regular pull and now I can’t wait for the next issues to come out. I haven’t caught up to issue #8, which came out June 8th 2016, but I figured I’d talk about the first 3 issues to give you an idea if this is the series for you. I’ll try to avoid spoilers but this series picks up fast and it may be hard to avoid. The Vision is interesting in the fact it’s heavily narrated by an unknown voice telling the story of The Visions trying to fit into suburban life in Arlington, Virginia. The Vision is a liaison for the President of the United States and his family consists of his wife Virginia and his two children Viv and Vin. All of Vision’s family act like Vision, they’re logical and like to talk about the philosophy of human interaction and what it’s like to be a human. As you could imagine, they’re trying very hard to be human and try to fit into their respective roles. Viv and Vin are trying to learn like humans do, they go to high school and listen to lectures in class and try to fit in. Virginia is acting as the housewife, taking care of the kids and the house trying to decide what she wants to do for a job. Out of all of the Vision’s, Virginia is the most sympathetic of the Vision family; not wanting Viv and Vin to leave for school, being afraid of how they’ll be treated, often crying at home alone. She’s especially afraid of what might happen if Vision was to learn about what happened to the Grim Reaper. 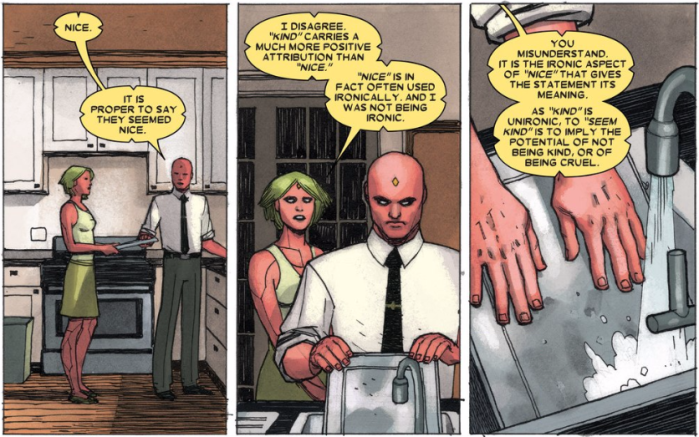 I’ll just say I’ll be taking a bit more with spoilers of the first issue, I’ll try to keep it brief but I’ll need to talk about something specific in the first issue to see how it affects the rest.

At the end of the first issue the Grim Reaper attacks the Vision family starting by impaling Viv through the stomach. For those who don’t know, Grim Reaper is the brother to Wonder Man who was the basis for Vision’s brain patterns after Ultron removed the Human Torch’s memory. Grim Reaper is pretty upset with Vision, creating his own family where Grim Reaper didn’t have a happy and normal family. As any mother might do she immediately comes to their defense and attacks  Grim Reaper and losing control at the sight of her daughter impaled, she kills the grim reaper with a serving tray. This affects the whole family, and we get to see the Vision’s dealing with what happened and how they begin to cope. Not only does this start to show the depth of these characters, but it’s what kicks off what’s told to us by the narrator in the first issue. Over the three issues we see how Vin is affected and acting out at school and home, the problems the family encounters from their neighbors and the lengths they’ll go to stay together. 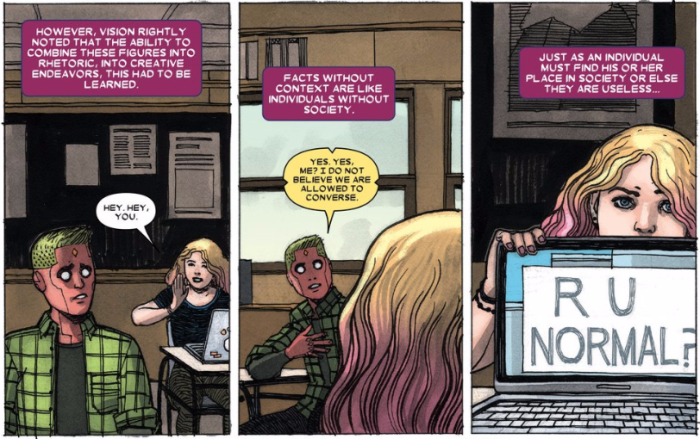 The writing in these first 3 issues is excellent, Tom King tells the story of a modern family trying to fit in to their new surroundings and the detachment the Vision’s feel from the world they’re trying to learn so much about. The dialogue between Vision and Virginia with its robotic nature still comes off as that of a wife and husband. Both Viv and Vin come off as awkward and naive teenagers while still processing things very logically. This book is a joy to read and is especially complemented by the art of Gabriel Hernandez Walta whose also worked on one of my other favorite series in recent years, Magneto. The character design of the Vision family is fantastic, giving each member a distinct face but also making them still seem eerily similar. Walta’s pencil work stands out but the coloring by Jordie Bellaire and her use of fall colors in the everyday scenes and stark blacks and white for dramatic scenes really make this series stand out.

Overall this series has a fantastic start, the story is interesting and the idea of Vision wanting to create a new family is compelling. The Vision family as a whole is great and is really about them dealing with this new world and their part in it. The covers by Mike Del Mundo have reminded me of Norman Rockwell paintings with a nice synthozoid twist. I highly recommend this series and can’t wait for the next couple issues, now I’m off to read issues 5-8 to catch up.