With the Batman v Superman Ultimate Edition coming out soon, I wanted to talk about Lex Luthor’s motivations and resulting actions in BvS:DoJ. There will be major plot SPOILERS so if you haven’t seen the movie yet go check it out and see what you think. 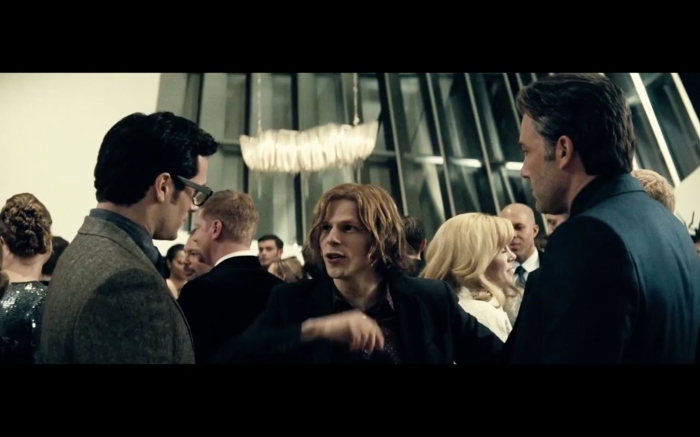 Lex Luthor is Superman’s greatest rival, constantly outwitting and scheming his way to the top, even as high as becoming the President of the United States of America for a short time. Lex in his earliest incarnations isn’t as obsessed with Superman as movie Lex is, his goals are usually revolving around amassing fortune and gaining power. His hate for Superman only comes to a head because Superman fouls his plans at every turn. When looking back at Lex’s history you’ll see he’s been re-written from a mad scientist vying for power into a friend of young superman, then to an abused child turned self-made billionaire. Lex as it stands today is an amalgamation of all these origins; he’s rich, incredibly smart, and most of all hates Superman. But why does he hate Superman? What did Superman do to Lex? Well the way I see it, Lex wants power and fame but Superman has the spotlight. Superman is the most powerful being on Earth an everyone, besides Lex and any villains, love him. A few of the stories show that Lex hates Superman because from Lex’s perspective, all the good things Superman does are to spite Lex.

Now that we have a good understanding that Lex Luthor from the comic is egotistical, power-hungry, and blames superman for being bald. Let’s look at Lex’s actions and how his motivation dictates those actions in BvS:DoJ. Early in the movie we meet Lex trying to secure an import license for a huge chunk of Kryptonite with plans to weaponize it as a deterrence against Kryptonians. From the beginning we can tell that Lex isn’t a fan of Superman, even from this first meeting we can surmise that he fears Superman. He talks to Senator Finch about how his father as a child in Germany had to worship dictators, then compares Superman to these same oppressive dictators. Seems like a stretch for someone to make, but this is a major part of his plan, Lex wants to spread fear about Superman and sway public opinion against Superman. Lex also wants access to the Kryptonian ship and Zod’s body to perform experiments and gain more knowledge about Kryptonians, presumably to gain more power over Superman. Lex is shown demanding Zod’s body and access to the ship from Senator Barrows, who seems to be in the mindset that Superman is too dangerous. Even though Barrows is willing, Lex still demeans the Senator by force feeding him some candy. The impression is that Lex isn’t a nice person, in fact he comes off as creepy and little unstable.

Shortly after we have Senator Finch visiting Lex at home; he wants to convince her that Superman is a threat and he needs the Kryptonite. We also learn a bit about why Lex might be the way he is as he tells Finch that his father used to say the secret to long life is Kentucky sour mash, the intent is that his father was most likely an alcoholic. Again through this scene we see that Lex is only really motivated by fear of people with power over him, from his abusive father to the supposed threat of Superman.

At a benefit Lex is holding, he gives a speech about philanthropy, which he describes as a love of humanity. He then goes on to mention Prometheus, a greek titan who gives fire from the heavens to mankind. I believe Lex see’s himself as Prometheus, the savior, the one to steal the knowledge of the heavens and give it to mankind but here you can see the screws start to loosen. We have Lex breaking down while orating that knowledge is power but often those with knowledge have no power. Lex is frustrated that he has the knowledge to kill Superman but no power to do so. This could also be due to Senator Finch blocking the import license, stealing his power from him.

Early in the movie we meet Wallace Keefe, an

employee of Wayne Enterprises, trapped under the rubble of Wayne Tower. Rescued by Bruce Wayne, later we see he’s lost his legs and is vandalizing the Superman memorial statue, built to honor Superman’s defeat of Zod and the destruction of Metropolis. Arrested for vandalism, his bail is posted by none other than Lex, who also brings him a brand new wheelchair and convinces him to testify at a congressional hearing about Superman. Lex doesn’t do anything for nothing and always has a play, this is perfect Lex Luthor characterization; you can tell Lex is up to something.

With Superman showing up to Capitol Hill to testify, we see that Lex Luthor isn’t there, he’s left a special gift for Senator Finch though, a big ol’ glass of granny’s peach piss. This is Lex laughing at Finch, it’s another show of power over authority. This all happens right before Wallace Keefe’s wheelchair explodes and blows up the Capitol Building. We can assume that Lex wants to get rid of the senator because she blocked his import license for the Kryptonite, but Lex already imported the Kryptonite illegally, and was planning on smuggling it anyways. All Lex wanted to show was that where Superman goes, destruction follows, but it comes off as chaos for chaos’ sake. Lex blows up his assistant Mercy Graves in that scene as well, you think he might to warn her or was she not in on his plan. Again, more chaos just to cause it. Here’s we see actions more suited to a villain like the Joker, chaos and anarchy just because.

During the Capitol Hill hearing we find that Wallace has been supposedly sending his checks back to Wayne Enterprises with big messages in red lettering saying he let his family die. This makes Bruce think that the Capitol Hill bombing is brought on by Wallace’s hatred of Superman and negligence by Bruce Wayne. It turns out that it’s really Lex sending these notes and playing Bruce Wayne for a fool, but there’s no point. Bruce is already going to fight Superman, he’s already decided to steal the Kryptonite, and he hasn’t seen any of these for the past 18 months anyway. Lex sending these notes could be considered a contingency plan ensuring that Batman would hate Superman, but for the past 18 months he’s already built up an immense hate for him without Lex’s help.

Though Lex tries to put forward an image of being sure in himself, getting closer to the end of his plan he becomes more destabilized. His actions were founded on his hate of Superman, but they’re acted out in Fear of Superman. This is why after Batman steals his final hope for killing Superman he goes ahead and starts creating Doomsday, a clear sign he’s given up and resorted to create chaos.

While Doomsday is gestating in the genesis chamber he still kidnaps Lois Lane and Martha Kent to force Superman to kill Batman. You could say Doomsday is an Ace up Lex’s sleeve and he needs Superman and Batman to fight till Doomsday is ready. But Lex could have just created Doomsday and set him after Superman which would have easily taken out Superman and the most of the world.

And at the end we see why this Lex isn’t nearly the same as his Comic counterpart in action over motivation. Lex’s motivation is Superman, his fear and jealously of Superman’s power exemplifies Lex’s character, it’s exactly who we expect Lex to be. His actions betray his character as they’re erratic, chaotic, and impatient. Lex blowing up Capitol Hill and creating Doomsday show he acts irrationally under pressure, which isn’t a trait I’d assign to Lex Luthor, it’s something I’d expect from The Joker. Hopefully when the Ultimate Edition of BvS comes out we can see why Lex’s actions might match his motivations and a bit more information about who’s involved in the upcoming DC movies.